Kalkee’s Blue Ribbon Raceway will return to life on the 27th of December when
Horsham Motor Sports Club will commence its race season.

The evening will feature the third round of the V8 AMCA Action Series, which has been hotly contested with the podium being shared by Dean Heseltine of Lancefield and Jamie Collins of Geelong winning the previous two rounds respectively.

END_OF_DOCUMENT_TOKEN_TO_BE_REPLACED 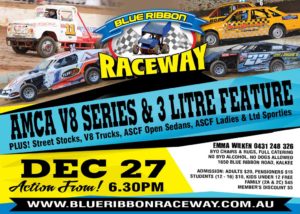 Mark Lincoln has been named Victorian AMCA champion after winning the feature race on Saturday night.

About 350 speedway fans descended on Kalkee’s Blue Ribbon Raceway to witness the running of the 2015 AMCA Victorian Title. The race meeting drew 25 of the best AMCA drivers from across Australia to battle it out for the title.

END_OF_DOCUMENT_TOKEN_TO_BE_REPLACED

Twenty-five V8s from five states across Australia will descend on Kalkee’s Blue Ribbon Raceway tomorrow for the AMCA Victorian Championships.

Three rounds of heats will determine starting positions in the main race.

END_OF_DOCUMENT_TOKEN_TO_BE_REPLACED 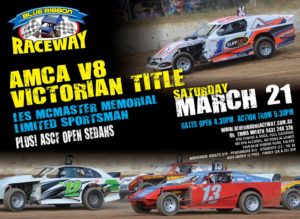