Secretary Graham Gerlach opened proceedings by thanking all that were in attendance and handed over to President Mick Fitzgerald to again thank all those present for a good year of racing and work at the track for the enjoyment of racers and fans alike. END_OF_DOCUMENT_TOKEN_TO_BE_REPLACED

The Horsham Motor Sports Club will celebrate Blue Ribbon Raceway’s 20th anniversary as it draws the 2016 season to a close on Saturday the 13th of August.

“Before the track was built we were a travelling club,” he said. “We’ve made a lot of upgrades over the years.

END_OF_DOCUMENT_TOKEN_TO_BE_REPLACED

Horsham Motor Sports Club has been celebrating 20 years of racing at Blue Ribbon Raceway this racing season. Back in 1996, a dream that had inspired the club since the early seventies to have its own track, was finally achieved after many years of work.

Since then many improvement have been made and the complex now has some of the best facilities in Victoria.

END_OF_DOCUMENT_TOKEN_TO_BE_REPLACED

This Saturday marks twenty years of motor racing at Kalkee’s Blue Ribbon Raceway. Horsham Motorsports Club have plenty to celebrate when looking back on how the venue has been developed since the inaugural meeting.

In 1996 the club held its first race meeting at the newly built track. Facilities for the opening meeting were fairly basic, with hired portable toilets and a tent for a canteen. The complex now has some of the best facilities in Victoria.

END_OF_DOCUMENT_TOKEN_TO_BE_REPLACED 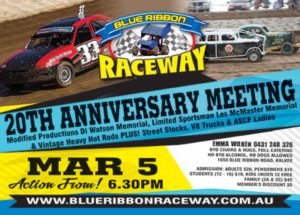