Sprintcar fans from across the region helped celebrate the 100th round of the All Star 360 Sprintcar series at Blue Ribbon Speedway on Saturday night with the large crowd kept entertained throughout the evenings program.

With 26 of the best 360 drivers competing on the night the competition was intense with no quarter giving on what turned into a great surface for Sprint car racing. In front of a large crowd of appreciative fans. Time trials produced a top speed and quick time from the South Australia 33 Mark Caruso at 14.232 seconds at 108.769 kph on the 430 metre racing surface and only 3 seconds separating the full field.

Six heats were run splitting the field of cars and the heats started to show the teams that were able to get the handling right and were able to keep lap times consistently in the high 14 seconds and were relatively trouble free. The third round of heats saw the 77 of Brayden Parr who, after contact, ran a number of laps with his front wing broken pulled onto the infield with a fire evident under his car and entering the driver compartment. With an excellent response from emergency personnel and officials Parr was removed from the car and the fire extinguished without further damage to the car and the driver was unhurt.

As the track crew worked to set the track up for the final the facility was plunged into darkness as there was a failure of the electrical supply to the lighting. Fortunately the fault was rectified quickly but the lights needed extra time to cool before being able to be turned back on. To the credit of the fans and the commentary crew every one took the delay in style and entertained themselves with renditions of Nutbush City Limits and the Chicken Dance.

After the break a shortened B main was run the top finishing cars transferring to the A main and with times into the low 14 seconds it was looking to be a great final.

After the now regular four wide salute to the crowd the 20 car field got under way with the drop of the green flag and it did not take long until contact saw the cars of Solomon, Cambell and Enderl pulling infield and a series of restarts before four laps were completed with Mitch Smith slamming the turn three wall doing serious damage but walking away unhurt. The most serious incident occurred on lap four when the cars of Daniel Scott and James Wren touched in turn four resulting Scott barrel rolling into the pit straight tearing off the wing but due to the safety features of these cars walked away shaken but unhurt.

The race continued unstopped for 10 laps and after another stoppage for a spinning car the race continued to the 30 laps finale with the hard charging Mathew Reed taking the chequered flag over Micheal Tancredi and Jordyn Charge the top three in the 100th round of the All Star series.

A field of 8 very competitive three litre saloons where on hand to compete in the GV Bearing’s feature event and the heats showed the field was very tight and it would be a hard fought event.

Heat 1 saw the 35 of Ben Naismith out front for 8 of the 10 laps, led only mid race by Jason Ahearn who kept Daniel Wilson at bay in third, heat 2 saw the 66 of Horshams Steve Honeyman take the lead from Shane Simpson on lap two and hold it from Simpson and a hard charging V2 of Lennie Clark.

Heat three was again a tight race with Andrew Ahearn taking the lead from the green flag and held it to the finish with Mick Boyle starting to get a hold on the track in second and Jason Ahearn in third. Local drivers Honeyman and Graham Gerlach again struggling with the track and set up.

Heat 4 again saw a dominant run by Andrew Ahearn from the front row to take the win followed by Mick Boyle with Naismith and Jason Ahearn fighting for third with Ahearn taking third.

The final run over 15 laps turned out to be a very hard fought and fast paced race with the front row of Clark and Andrew Ahearn running nose to tail until lap 11 when Ahearn pulled infieldto join Gerlach, Daniel Wilson and Naismith.

Coming up fast through the field Horsham’s Honeyman was waging a fierce battle with Swan Hills Boyle with both cars swapping positions in the latter stages of the race. With three laps to go Boyle got the run on Clark and Jason Ahearn and took the checkers in a very entertaining race followed by Clark, Shane Simpson who got by Ahearn on the last lap and Honeyman dropping back in the field.

A field of six Vintage cars ran three rounds of demonstration events during the night giving the large crowd a look at what it was like back when cars were built in back yards and sheds and in farm yards for weekly trips to the picnic races.

A small field of Limited Sportsman ran a series of short sprint runs in packs that showcased the speed and agility of these very popular cars and will be sure to produce more great racing at Blue Ribbon this season.

The next event to be held at Blue Ribbon Raceway is Saturday February 9 when the Modified Tractor Pull.

Horsham Motor Sports Club brought their 2017/18 season to a close over the Queens Birthday long weekend with an old fashioned Sunday Butchers Picnic.

Featuring Wingless Sprints, Limited Sportsman, Three Litre Sedans, SSA Juniors, Street Stocks, three Vintage Classes and Horshams own V8 Trucks and, as a salute to the past, mechanics were strapped into the cars they work and set loose to strut their stuff.

A small amount of rain hit the track in the days before and the track crew  worked hard to prepare the racing surface. As usual the track came up beautifully and it was a credit to the team. END_OF_DOCUMENT_TOKEN_TO_BE_REPLACED

Another successful season for the Horsham Motor Sports Club is coming to a climactic end on the Queens Birthday weekend this Saturday and Sunday.

After a long season of Club, State and National titles, this weekend will hark back to the early days of speedway with a two day meeting featuring many of the classes that have been the backbone of speedway in the region and the sport.

END_OF_DOCUMENT_TOKEN_TO_BE_REPLACED 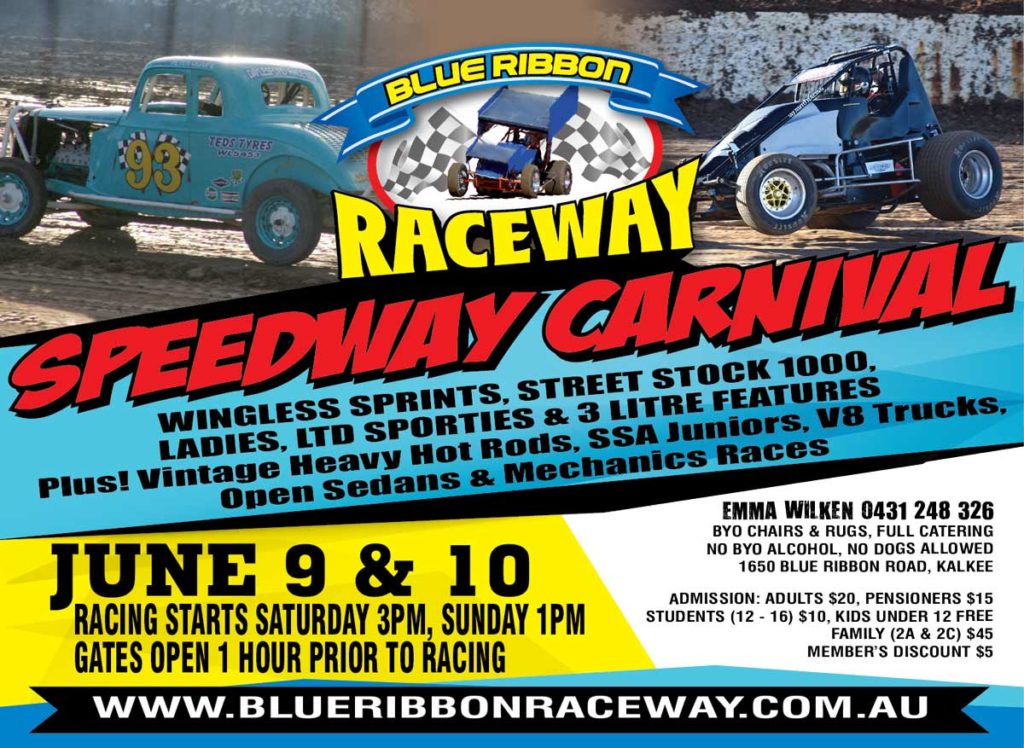