The 2015 / 2016 speedway season came to a conclusion at Blue Ribbon Raceway during the long weekend. 120 drivers came to race in the two day race meeting, which featured ten different classes of race cars.

Topping the bill was the Wingless Sprints who were well represented; 30 drivers raced two heat races each night to decide starting positions of the final race. END_OF_DOCUMENT_TOKEN_TO_BE_REPLACED

On Saturday, 11th of July the Horsham Motor Sports Club celebrated another successful year of speedway, at the Kalkee Football Club Function Rooms.

END_OF_DOCUMENT_TOKEN_TO_BE_REPLACED

An important community event for Horsham and Kalkee was held at the entrance to Blue Ribbon Raceway on Sunday morning. Horsham Motor Sports Club began the second day of its Speedway Carnival with the official opening of the newly built ‘Robin Thomas Memorial Gateway’.

About 100 people were in attendance and the ceremony began with a speech from club president Mick Fitzgerald summarising Robin Thomas’ achievement and phenomenal work that he put into the Speedway Club.

“Robin worked tirelessly for our Club; he was a humorous and extremely generous person; a club member since the early 1990’s; a committee member possibly in every year since joining”, said Fitzgerald.

END_OF_DOCUMENT_TOKEN_TO_BE_REPLACED

The Queen’s Birthday weekend Speedway Carnival at Blue Ribbon Raceway began on Saturday afternoon, but not without earlier concern of drizzle for Horsham Motor Sports Club officials. Although the weather passed by midday the track surface was very greasy. The program featuring 82 races over the weekend was re-shuffled, 33 Wingless Sprint Cars were then the first to race in an attempt to dry out the track aided by their large race tyres.

END_OF_DOCUMENT_TOKEN_TO_BE_REPLACED 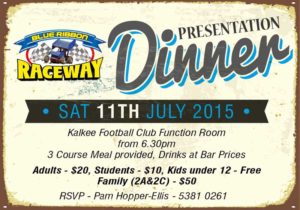