Speedway fans came out in force on Saturday night to Kalkee’s Blue Ribbon Raceway to see the return of the Eureka Sprintcars.

Over 1500 people flocked to the quarter mile dirt track north of Horsham to see the “Big Banger” Sprintcars race the 14th round of the Eureka Garages & Sheds series.

It was the first time in six years since the Sprintcar Racing Association raced at Blue Ribbon Raceway and this time they brought their 410 cubic inch V8s.

END_OF_DOCUMENT_TOKEN_TO_BE_REPLACED

It has been six years since the SRA Victorian Sprintcars raced at the Kalkee track, and club members are excited to see their return.

Drivers from across the nation representing six states have nominated for the event. All but one of the current top ten championship drivers will be racing for points for the Eureka Series on Saturday.

Blue Ribbon Raceway will host the penultimate round of the series, which has raced at many of the tracks around Victoria this season. Only 397 points separate the current to 5 drivers, but with a possible 430 points on offer, the championship is still wide open.

END_OF_DOCUMENT_TOKEN_TO_BE_REPLACED

The Sprintcar Racing Association of Victoria is returning to Blue Ribbon Raceway at Horsham this weekend for the penultimate round of the 2016-2017 Eureka Garages & Sheds Sprintcar Series that is still a wide open affair for the Eureka Series Championship Crown between five drivers.

The current Eureka Series Champion Brett Milburn took the Eureka Garages & Shed / KTM points leads after round thirteen last weekend at Premier Speedway from Tim Van Ginneken who had two bad nights in a row but still sits only one hundred and ten points behind Brett Milburn.

END_OF_DOCUMENT_TOKEN_TO_BE_REPLACED 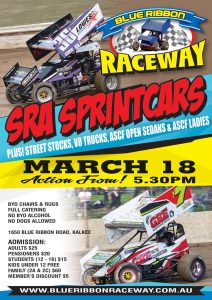