The 2015 / 2016 speedway season came to a conclusion at Blue Ribbon Raceway during the long weekend. 120 drivers came to race in the two day race meeting, which featured ten different classes of race cars.

Topping the bill was the Wingless Sprints who were well represented; 30 drivers raced two heat races each night to decide starting positions of the final race. END_OF_DOCUMENT_TOKEN_TO_BE_REPLACED

A big two-day race meeting of speedway is set for this weekend with the running of the Blue Ribbon Raceway Speedway Carnival. The annual two day race meeting will be held on Saturday 11th and Sunday 12th, with speedway drivers from across Victoria and South Australia racing on both days.

A huge field of 37 Wingless Sprints have nominated to race on the weekend, in what has become an annual feature race. The Horsham club now has two drivers in the popular class. Jeremy Beddison will be unveiling his newly built car for the first time this weekend. Steve Hately who now has a season of Wingless Sprint racing under his belt, looks forward to finally challenging the field on his home track.

END_OF_DOCUMENT_TOKEN_TO_BE_REPLACED

Kalkee is set for a weekend of speed with the annual Blue Ribbon Raceway Speedway Carnival set to take place.

The two-day race meet will be held on June 11 and 12 with speedway drivers from across Victoria and South Australia in competition on both days.

The gates will open at 2pm on Saturday with the speedway action starting at 3pm, while Sunday’s racing will start at 1pm.

END_OF_DOCUMENT_TOKEN_TO_BE_REPLACED 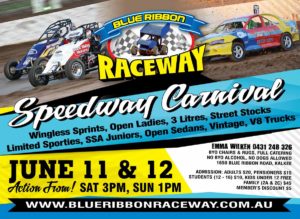